Demonstrate doors ability to withstand simulated breaking through the doors. The Concentrated Assault Test is performing by a team of 2 or 6 men (depends on the test level) using various tools in an attempt to penetrate the door. The test personnel are muscular in good health condition men between the ages of 18 and 34 years, whose body weight is not less than 72 kg nor bigger than 113 kg

That is one of the main differences comparing to the European EN1627:2011 standard, where only one man performs manual burglary attack tests.

Level 5 min (FE5) – Concentrated Assault on three most vulnerable locations (center of the door, lock side and hinges side), 5 minutes for each attack, two muscular testers, use heavy-duty tools. Tests perform for both door sides, outwards and inwards opening.

Level 15 min (FE15) – Concentrated Assault on three most vulnerable locations (center of the door, lock side and hinges side), 15 minutes for each attack, six muscular testers, use heavy-duty tools.  Tests perform for both door sides, outwards and inwards opening.

During those tests, both of our doors models Munitus FE5, and Munitus FE15 had manual burglary attacks on both sides (outwards and inwards openings). For those tests, we used two test doors for FE5 tests and two doors for FE15 tests, although the standard allows using different doors for every each test (centre, lock side and hinges side). That means every our test door withstood three attacks on one side. Munitus FE5 door withstood in total 15 minutes attacks for each side. The same door model Munitus FE15, which withstood whole 45 minutes attacks one each side and the doors stood not opened or penetrated enough to fail the test.

When the tests completed, and the Munitus FE15 door withstood 45 minutes of attacks for both sides, we asked laboratory personal to carry on the test until failure. The door withstood 56 minutes of the attack of six muscular men using various heavy-duty tools. That is much more than requires the standard!

Door model Munitus FE15 as all our doors are custom made and can have any design can be used for inside and outside conditions (using suitable finishing panels and electro-galvanized steel ). Filled with 60 mm of rock wool, that gives excellent heat and sound insulation. 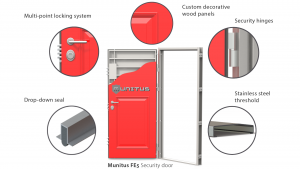 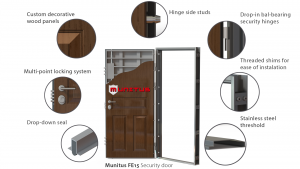 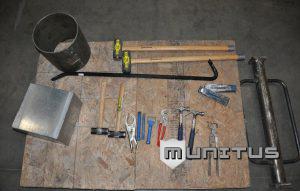 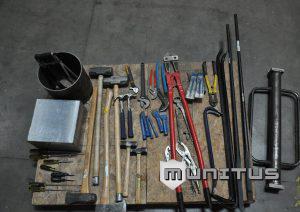 Pictures of the tests. 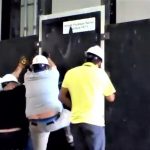 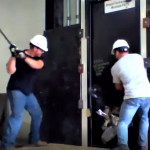 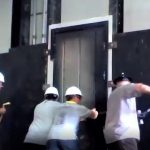 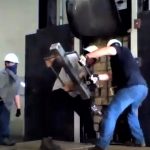 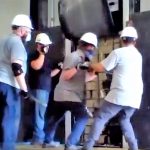 Munitus FE15 door after 56 minutes of burglary attack until failure.

This website uses cookies to improve your experience while you navigate through the website. Out of these cookies, the cookies that are categorized as necessary are stored on your browser as they are essential for the working of basic functionalities of the website. We also use third-party cookies that help us analyze and understand how you use this website. These cookies will be stored in your browser only with your consent. You also have the option to opt-out of these cookies. But opting out of some of these cookies may have an effect on your browsing experience.
Necessary Always Enabled
Necessary cookies are absolutely essential for the website to function properly. This category only includes cookies that ensures basic functionalities and security features of the website. These cookies do not store any personal information.
Non-necessary
Any cookies that may not be particularly necessary for the website to function and is used specifically to collect user personal data via analytics, ads, other embedded contents are termed as non-necessary cookies. It is mandatory to procure user consent prior to running these cookies on your website.
SAVE & ACCEPT
error: Content is protected !!